History of the Bories

On the first slopes of the Monts de Vaucluse, facing the Luberon, the village des Bories, with its sheep pens, bread ovens, wine vats, wheat beating areas, alleys, enclosures and walls, bears witness to the laborious activity of countless generations. Nearly 3000 years of continuity, since the origin of the bories dates back to the Bronze Age, and the most recent ones were built in the 18th century.

On the first slopes of the Monts de Vaucluse, facing the Luberon, the village des Bories, with its sheep pens, bread ovens, wine vats, wheat beating areas, alleys, enclosures and walls, bears witness to the laborious activity of countless generations. Nearly 3000 years of continuity, since the origin of the bories dates back to the Bronze Age, and the most recent ones were built in the 18th century. The Village des Bories, classified as a historical monument in 1977, is the most important collection of this dry-stone habitat, characteristic of the area around Apt, whose highest concentration of these buildings is found near Gordes.

Abandoned for more than a century, invaded by vegetation, the village suffered the ravages of time and severe destruction. It became urgent to restore it and preserve this rare example of spontaneous architecture fortunately integrated into the site by the use of raw materials in an economy of means and shapes. It is now protected, but open to visitors. Organized as a museum of rural life, it houses a collection of traditional objects and tools from the region, an archive of documentation about Gordes' past, dry-stone bories and architecture in France and around the world.

The discovery of the village des Bories is incomparable. The harmonious layout of the horizontal and vertical structures, balance between plants and rocks, the light effects of the rising and setting sun, all contribute to the original charm of a privileged location that is best appreciated in the calm and light of morning. 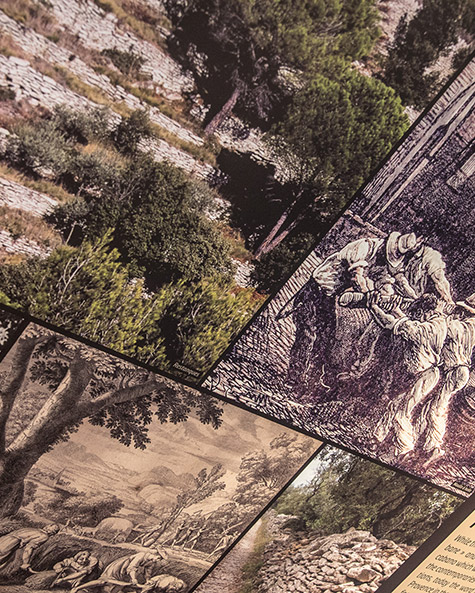 The history of the village

An afternoon with Ioan Gusa and Claude-Henri Roquet, in Gordes, to visit "the village des bories". An extraordinary impression. To be able to freely enter a village with a Neolithic structure, which was inhabited until the 18th century... Just a little imagination, and we discover a whole world of values and meaning that would be very hard to see in books, photos and isolated rooms in museums...

Like any architecture, dry-stone buildings correspond to an evolution of French society.
In the 17th and 18th centuries, the country had to cope with population growth and started a "bulimia of land" to avoid "grain shortages". The most impoverished farmers, labourers, and a small group of people acquired vacant and uncultivated land, often far from the villages.
Through hard work and relentless land-clearing efforts, these people conquered new lands from forests and scrubland and created fields where they developed new complementary activities.
During the creation of these plots, the stones removed from the ground using crowbars and then lifted out by ploughs were an inexhaustible and very economical godsend for building.
At that time in Provence, the hillsides and plateaux were colonized by farmers and dry-stone constructions which gave a new face to the countryside.

The generic local term for this type of construction is simply a “hut”. It is also the term that purists prefer because it is the name used by the older generations to designate these constructions. Yet today in the region it is the term “borie” that is commonly used.
Borie is the French equivalent of the Provençal word bori designating a farmhouse and comes from the medieval boveria, boria, or a livestock barn. In French, it is used indiscriminately in both the feminine and masculine forms.

History of a rebirth…

Unused, the huts sunk into oblivion for almost a century, they quickly become prey to brambles and acted as hunting blinds while the stones were looted.
We owe their rediscovery and safeguard to Pierre Viala, a poet, writer, comedian and globe trotter who arrived in Gordes in the 1960s and fell in love with the village, its countryside, and its bories. He says:
« There are surely many of us among "those who came from elsewhere" to preserve intact the memory of the emotional shock of the discovery of Gordes, which led us to take root here. Easter 1956! After the famous frost that had scorched nature, how exhilarating it was to run around the garrigue, true "terra incognita", once cultivated, but once again wild after decades of abandonment. Surprisingly, there is no living soul, and so few houses, all in ruins. A whole world vanished into a mineral chaos invaded by devouring vegetation. And the bories! Since that time I have developed a passion for these huts.

In 1968 I learned that these lands were for sale (...), I sold my house and became the owner of the ruins of my dreams and dedicated myself to saving the bories for which I now felt responsible (...) The restoration work spread out over a period of eight years without any financial assistance, with the precious help of the excellent masons from Gordes. (…).»

His passion for old stones and the history of Gordes, his attachment to this unique and remarkable site, and respect for the hard work and know-how of our elders were the driving force behind Pierre Viala's rescue that enabled us to reclaim our heritage.

The restoration is crowned by the French Academy of Architecture.
The site was classified as a Historic Monument in 1977.
In 1983, the town of Gordes become the site’s owner and administrator.
Today, it is one of the most visited sites in Vaucluse.

Here, limestone rock is everywhere. Tender, easy to extract and to shape, frost-resistant, it was already exploited by the Romans and today you can still find many quarries in the area. But the stone that best identifies the lithic landscape of the Monts de Vaucluse, and Gordes in particular, are the modest stones removed from the fields. All along the slopes of the Luberon mountain and the Monts de Vaucluse, men used exclusively this inexpensive and inexhaustible supply of stones, that required no transport and was accessible to all, to build thousands of dry-stone constructions, constructions that required hard work, patience and abundant labour. This rich and varied architectural heritage contributes to the identity of our landscape: clapas (piles of stone found on the edge of fields), restanques (terraces), retaining walls, enclosures, walls around fields or framing paths for kilometres, cisterns,"apiaries" or bee yards, huts or bories.
The countryside of Gordes still houses many of these magnificent heritage structures that are witness to this unique architecture before they disappear altogether.

The Village des Bories in Gordes

Before being known as the Village des Bories, this hamlet 270m above sea level near Gordes, was called "Les Cabanes".

Without a cemetery and church, this hamlet is typical of temporary settlements which, in Mediterranean countries, doubled the size of permanent villages and was linked to seasonal agricultural work.

Its appearance results from the important development of farmlands that Provence saw in the 17th and 18th centuries. The rush of people moving to the hills around Gordes is at the origin of thousands of tons of stones extracted from the soil while developing fields and gave birth to the different groups of huts found on this limestone plateau. The cleared plots were planted with "dry" crops: mulberry and almond trees, cereals and feed grains but especially olive groves. Nearby, oil mills of considerable size provide us with information on the principal activity of Gordes until the Great Frost of 1956: oil production.

The meagre income from the exploitation of these drylands was a way for people to escape hunger and the lack of grain, which often threatened them. 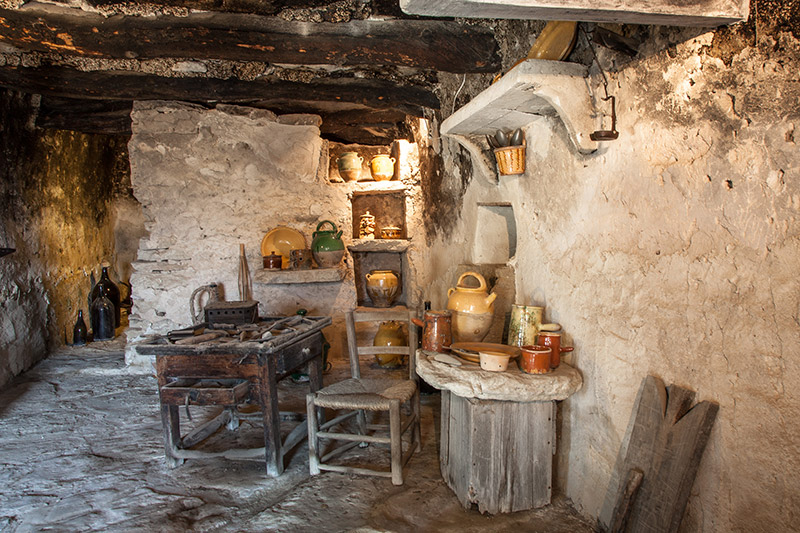 « Dry Stones », an architecture of necessity

The main builders were humble farmers and shepherds who practised building things themselves with the stones they found on the ground.
The largest huts, of a beautiful malleability, and with an elaborate architecture are the work of professionals, masons whose names are lost but who were true "masters" of dry stone and who left us magnificent works.

The expression "dry stone masonry" means the laying of selected and cut stones without using cement or other binding material: lime or earth.
This technique achieves a degree of perfection in the construction of the huts and especially corbel arches, the most delicate phase when assembling the stones.

Corbel arches do not require any formwork. The stones are placed horizontally or even slightly tilted outwards to prevent water from entering. Each row slightly overhangs the row below. The stones are carefully crossed and the rows become interdependent. To finish the hut, large flat stones are placed along the ridges of the roof to ensure the archway’s stability.

The characteristic upside-down hull-like roofs of the huts around Gordes are the most delicate to build.